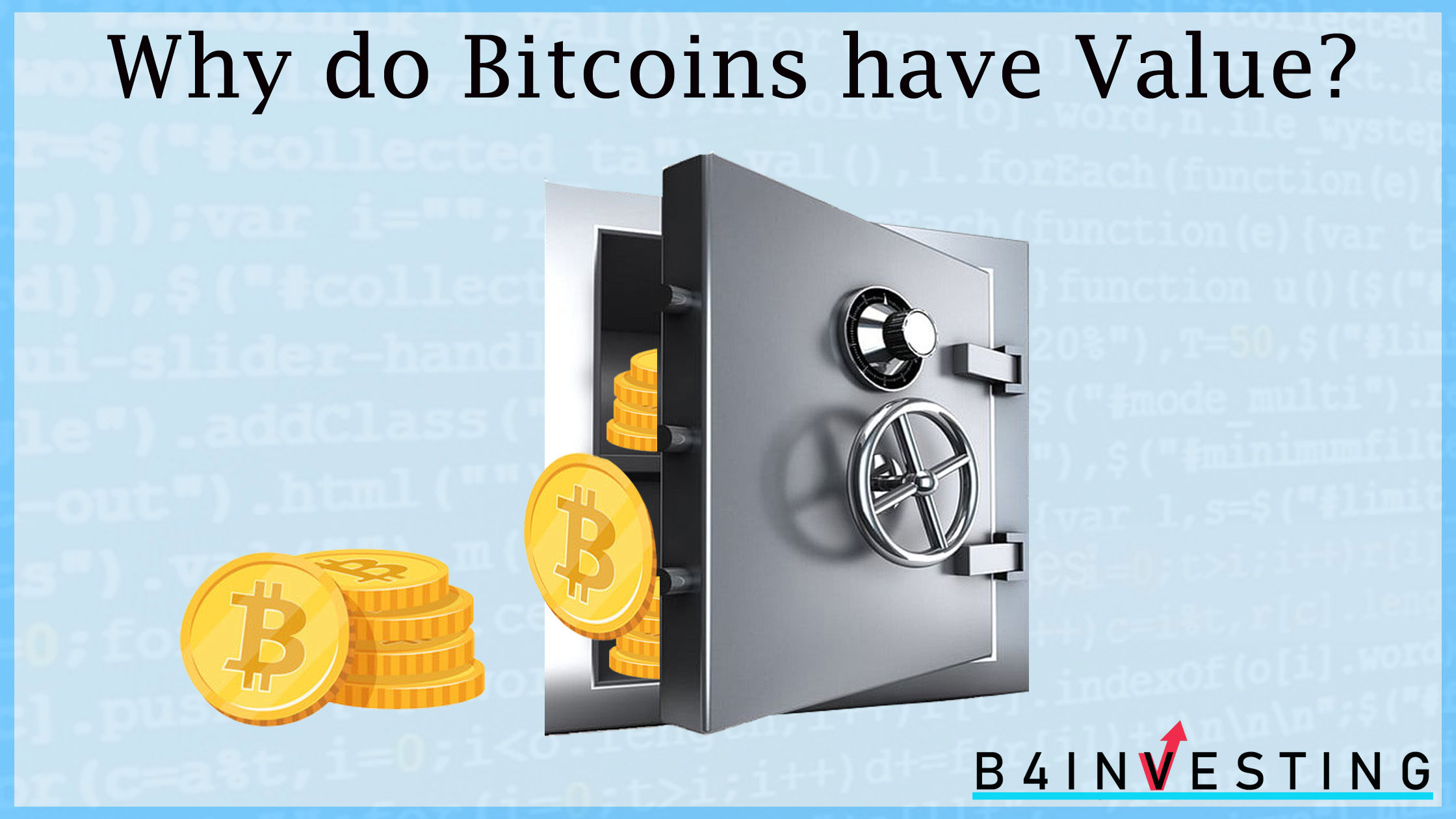 Why do Bitcoins have Value?

Bitcoin is said to be digital gold but what gives bitcoin value. In 2010, one bitcoin was costing about $0.08 and now price of bitcoin is $59,172.10. What makes single bitcoin so much valuable. Lets read about it.

Value of money whether it is sea shell, metal coin, printed note or string of code mined by computer is decided by the importance and faith people place on it as medium of exchange, storage of wealth. People can trade goods and services with money, money is a way to store individual’s wealth, money is used to decide the price of goods.

Money is required by all human beings to live basic life like to buy food, house, clothes, services, etc. Money is socially accepted form of payment. In old time, people used to trade goods and services against other goods and services. Like, farmer used to buy pair of shoes by exchanging a basket of fruits.

Then a type of currency developed which involved easily traded item like weapon, salt, animal skin. And then people started using gold coins, silver or precious metal coins as currency. Why precious metal coins? As these precious metals have stable value. Gold’s value depend upon the cost of extraction, purity.

Banks eventually replaced metal coins with paper banknotes for depositors and borrowers. These paper banknotes could be taken to the bank at any time and exchanged for their face value in metal coins. But these bank notes were issued by banks and private institution, not government. The value of these paper money was determined by the amount of gold backing it.

Read also: Classification of Banking System in India and how do banks work with RBI?

In modern age, the government is responsible to issue currency. Many global currencies are classified as fiat currencies which means these currencies are issued by government but not backed by any commodity. Fiat currency is found to be most durable and least prone to loss of value by many governments and societies. The value of such government backed currency is measured by its demand and supply, faith placed on it i.e. how much people believe it to be valuable. The US dollar is not backed by any commodity, but still has high value because a broader system or society accepts that it does have.

The value of digital currency

As gold is precious metal. Gold coin was useful currency but it was heavy to carry in large amount. Paper note is a good solution but then it needs to be manufactured and stored. Digital currency is mobile and it doesn’t need physical space to be stored. Just few clicks and payment is done without actually having to carry it. As money evolved, it always had the following attributes – fungibility, scarcity, and uncounterfeitability. Currencies should be easily portable, stable, and divisible.

Why do Bitcoins have value?

Bitcoin is cryptocurrency. Cryptocurrency is a type of digital currency that can be used as a means of payment to purchase goods and services. They can be transferred into accounts as well as exchanged for cash. Cryptocurrency is based on the principle of decentralization which means it is not backed by any government. The transactions made through cryptocurrency holders are not regulated or controlled by any kind of financial or governmental authority. It uses cryptography that offers a security system that is very difficult to crack.

Bitcoins can be used as store of value like we use gold for store of value. That’s why bitcoin is called as digital gold. We cannot touch bitcoin but it gives features like fiat currency. Anyone with internet connection can transfer bitcoin from one place to another place by simple clicks. We don’t need communication channel to transport bitcoin from one place to another. Bitcoins provide transparency.

Scarcity: Any cryptocurrency or bitcoin have a limited supply. The algorithm puts cap on total supply of cryptocurrency. As the supply is limited, purchasing power will be increased. There are going to be only 21 million BTC. Fiat currencies undergo annual inflation and lose part of its value but Bitcoin’s inflation is limited and controlled.

Bitcoins that are lost (send to incorrect, non-existing addresses, or those in wallets whose keys were lost, etc.) will reduce the number of Bitcoins.

Divisibility: A single Bitcoin can be divided into 100000000 Satoshis. One Satoshi equals 0.00000001 BTC which is the smallest unit of Bitcoin at the moment. This level of division is embedded in Bitcoin’s original code.

Bitcoin offers an infinite degree of divisibility which means if there’s ever a need, the level of division can be changed into 16 or more decimal places.

Portability: Governmental policies and restriction make transferring of money across border very expensive and tedious process. Cryptocurrency has made this job easy and is helping people to send money to their family sitting in a different nation. It is easily accessible across the globe.

Fungibility: Like physical money, cryptocurrencies are fungible, meaning that they can be traded or exchanged, one for another. For example, one bitcoin is always equal in value to another bitcoin.

Durability: Any Bitcoin or Satoshi can be reused countless times without degrading(like notes get degraded over a period of time or use).

Recognizability: Bitcoin is accepted by a growing number of merchants and users. But this number is still far behind from the number of users who have accepted the fiat currencies.

Decentralization: the decentralization of cryptocurrency makes it free from monopoly and keeps a check on it that no particular organization can decide the flow and value of it.

Self-governed and managed: The transactions of cryptocurrency are stored by the miners(developers) on their hardware system for which they get a commission or fee as a reward. As the miner is getting a fee it is their job to keep the records up-to-date and precise. The development of any currency dependents hugely on its governance and maintenance.

Accessibility: You don’t need to have a verified bank account to own or accept Bitcoins. All you need is some basic computer knowledge and an internet connection. Bitcoin’s accessibility makes it extremely convenient for underbanked areas of the world.

Uncounterfeitability: Fake currencies are counterfeits that mimic the original central bank-issued fiat money. But Bitcoin is a digital currency which has limited online accessibility and usage. The only way to counterfeit Bitcoin is through double-spending, using the same token for two separate transactions.

Cryptocurrency works on a decentralized network or a blockchain technology. It is spread across many computers which manages and records transactions in decentralized ledger and is secured by the computation work of nodes. The system was designed to prevent the double-spend problem. All transactions on the Bitcoin network are uncounterfeitable and irrevocable.

Stability and store of value: The only feature which is still somewhat lacking is; Bitcoin’s price stability. Because of volatility, Bitcoin is used more like a commodity such as gold. However, that is likely to change when Bitcoin gains more adoption, and there are fewer incentives to speculate it. Until the widespread adoption of cryptocurrencies, Bitcoin is expected to remain somewhat volatile.

We read why currencies have value and then why bitcoins have value in todays world. Any currency has value because people believe it to have value. Cryptocurrency is a type of digital money used to purchase goods and services. The more the number of Bitcoin users and merchants grow, the system will become advanced and secured and the value of bitcoin will also increase.