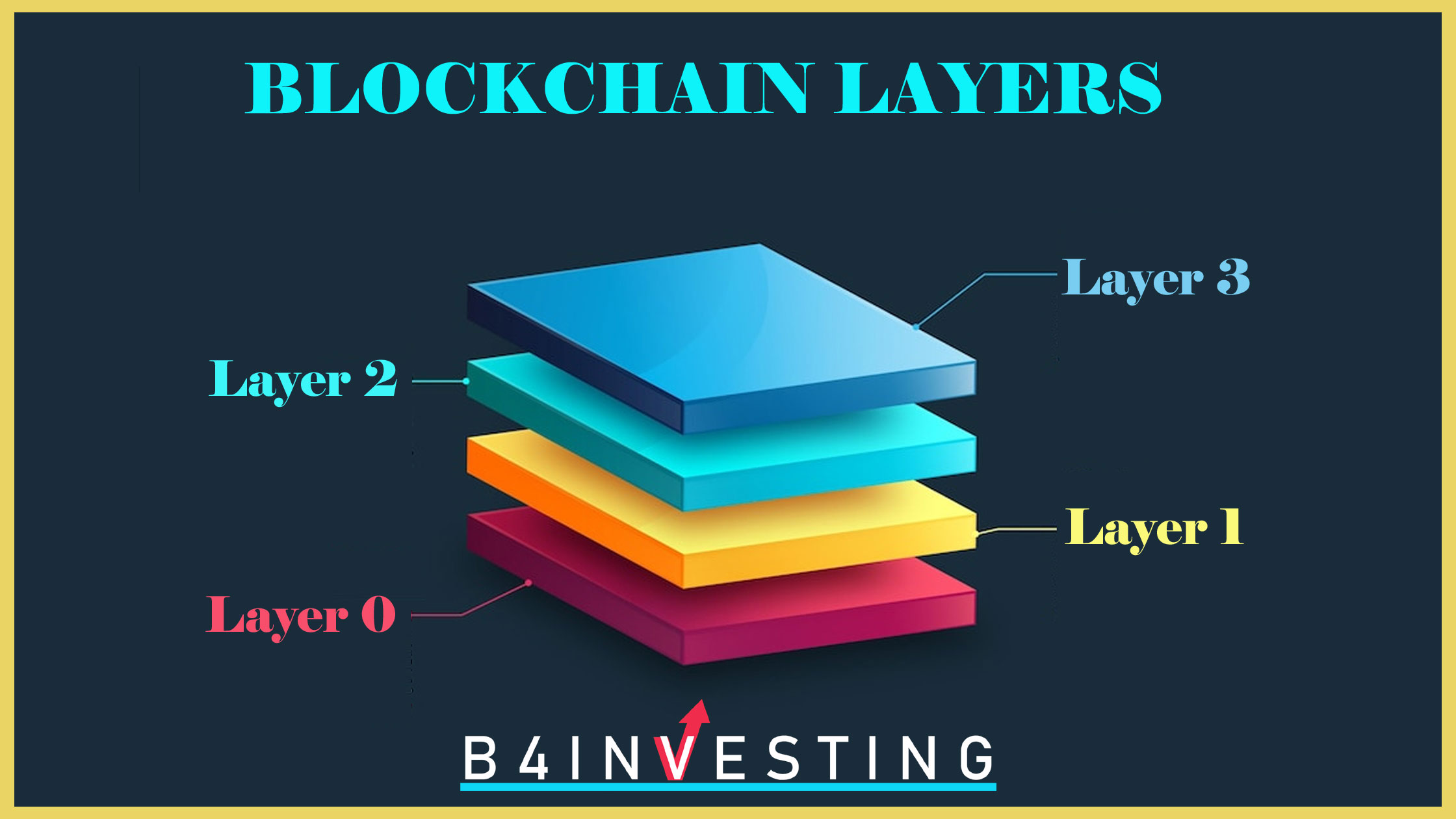 Blockchain technology keeps information fully secured, and there is no possibility of hacking and cheating. There is a list of blocks under the blockchain. Each block is authorised by a particular person, and records are maintained block-wise. Transactions are recorded in multiple places at same time by distributed ledger technology (DLT), and they are maintained by Hash, a cryptographic digital signature. Encoding and decoding data is a mathematical and computational discipline known as cryptography. DLT stores all information in a secure and accurate manner using cryptography.

What Are Blockchain Layers?

As blockchains do not have a centralized governing authority, all transactions are rigorously safeguarded, and data is securely stored on a distributed ledger. Distributed ledger technology (DLT) follows a predetermined protocol, where multiple computers (or nodes) throughout the network come to a consensus to confirm transactional data. Each node adds, examines, and changes each and every new entry arrived. Blockchains features a layered design to allow this unique kind of transaction authentication.

Blockchains use a layered design to support this method of transaction authentication. There are five levels involved, each with its own set of functions. Let’s read the layers in blockchain architecture and what each layer does.

The layered structure of the blockchain architecture

When we use blockchain apps or website, we request access to this blockchain data which is securely stored on server. The client-server architecture is the framework which enables this data exchange.

Blockchains are peer-to-peer (P2P) networks of nodes that connect clients with “peer-clients” to accelerate and simplify data sharing. It is huge network of devices communicating and exchanging data. This is how a distributed ledger is born. A node is any device on the network that connects with another device. At random, each node examines transactional data.

A blockchain collects information in block; a group. Block has certain storage capacity so when it is filled, it is closed and linked to the previously filled block. This forms a chain of data known as the blockchain. When a new transaction occurs on the blockchain, a record of that transaction is added to every participant’s ledger.

Every transaction is ‘digitally signed’ with the private key from the sender’s wallet. This key is only accessible to the sender, ensuring that the data is not accessed or tampered with by anyone else. This is called ‘finality’. The digital signature also protects the owner’s identity, which is encrypted for maximum security.

As mentioned above, blockchain is peer to peer network of nodes. This peer to peer network enables multiple nodes to transmit transaction data in order to achieve an agreement on a transaction’s legality. So, to make this communication faster, every node on the network must be able to discover other nodes on the network. The network layer facilitates this ‘inter-node communication.’ Because it controls node identification, block production, and block adding, this layer is also known as the ‘Propagation Layer.’

This is the primary layer in blockchain operations. This layer is in charge of transaction validation, and if it fails in any case, the entire system fails. This layer is also in charge of the protocol, which necessitates a certain number of nodes to validate a single transaction. Each transaction is processed by a large number of nodes. All processes done by different nodes must conclude at the same conclusion and agree on the transaction’s authenticity. This type of approach maintains the blockchain’s decentralized nature as the role of transaction process is distributed and no single node has sole control over transactional data. This is known as the consensus mechanism.

Because there are so many nodes processing transactions, packing them up, and adding them to the blockchain, and several blocks may be generated at the same time, resulting in a blockchain branch. The consensus layer ensures that this dispute is addressed.

This layer hosts smart contracts and decentralized apps (dApps). Contract expiration dates, spot price achievement, and other factors affect smart contracts’ decisions. The activities that emerge from these decisions are carried out by dApps. All of this takes place at the application layer.

dApps also facilitate consumer device communication with the blockchain. dApp acts as the user-facing front end, while the main blockchain acts as the backend, where the data is securely stored.

Blockchain technology layers are categorized as:

Blockchain layer zero consists of hardware, protocols, connections, and other components that form the foundation of a blockchain ecosystem. Layer-0 acts as a network architecture, a “network of blockchains.” Layer-0 provides inter-chain operability. It allows blockchains to communicate with one another.  Layer 0 is the initial stage of blockchain that allows various networks to function, such as Bitcoin, Ethereum, and many more.

Scalability problem can be solved by alternative consensus mechanism, proof of stake and Sharding. Sharding divides the work of validating and authenticating transactions into smaller, more manageable chunks.

Layer two is a third-party integration that works with layer one to increase the number of nodes and, as a result, system throughput. Extra processing power is required to increase productivity of blockchain. Adding nodes is essential else scalability, decentralization, or throughput will affect the others on layer 1.

A layer two blockchain is stacked on top of another. Layer one sets the parameters, while layer two executes the operations. Layer 2 improves Layer 1 and manages all the transactional validations. Level 2 has shown to be the most effective method for addressing scalability issues in PoW networks in particular.

There are many scaling strategies implemented by level 2 like Nested Blockchain, State Channels, Sidechains, Rollups.

Level 3 is the last layer of the blockchain which serves as a user interface. Layer 3 is the one where participants will eventually interact with the user interface. When working with Layer 1 and Layer 2, this layer aims to provide simplicity and ease to the overall functionality.

Layer 3 is also beneficial in the form of intra- and inter-chain operability, such as decentralized exchanges, liquidity provisioning, and staking applications . Decentralized apps (dApps) are a type of layer 3 interface that provides real-world applications for blockchain technology.

We read there are three layers in the blockchain; Layer 0, Layer 1 and Layer 2. Each layer has its own protocols. Layer one is critical because it serves as the basis for decentralized systems. Blockchain’s scalability issues are addressed via layer two protocols. The majority of layer three protocols (DApps) still function solely on layer one, skipping layer two. As the demand for cryptocurrencies is growing, the pressure to expand blockchain protocols will also grow. Blockchain levels have their own set of restrictions, the eventual solution will be to develop a system that can solve the scalability trilemma.