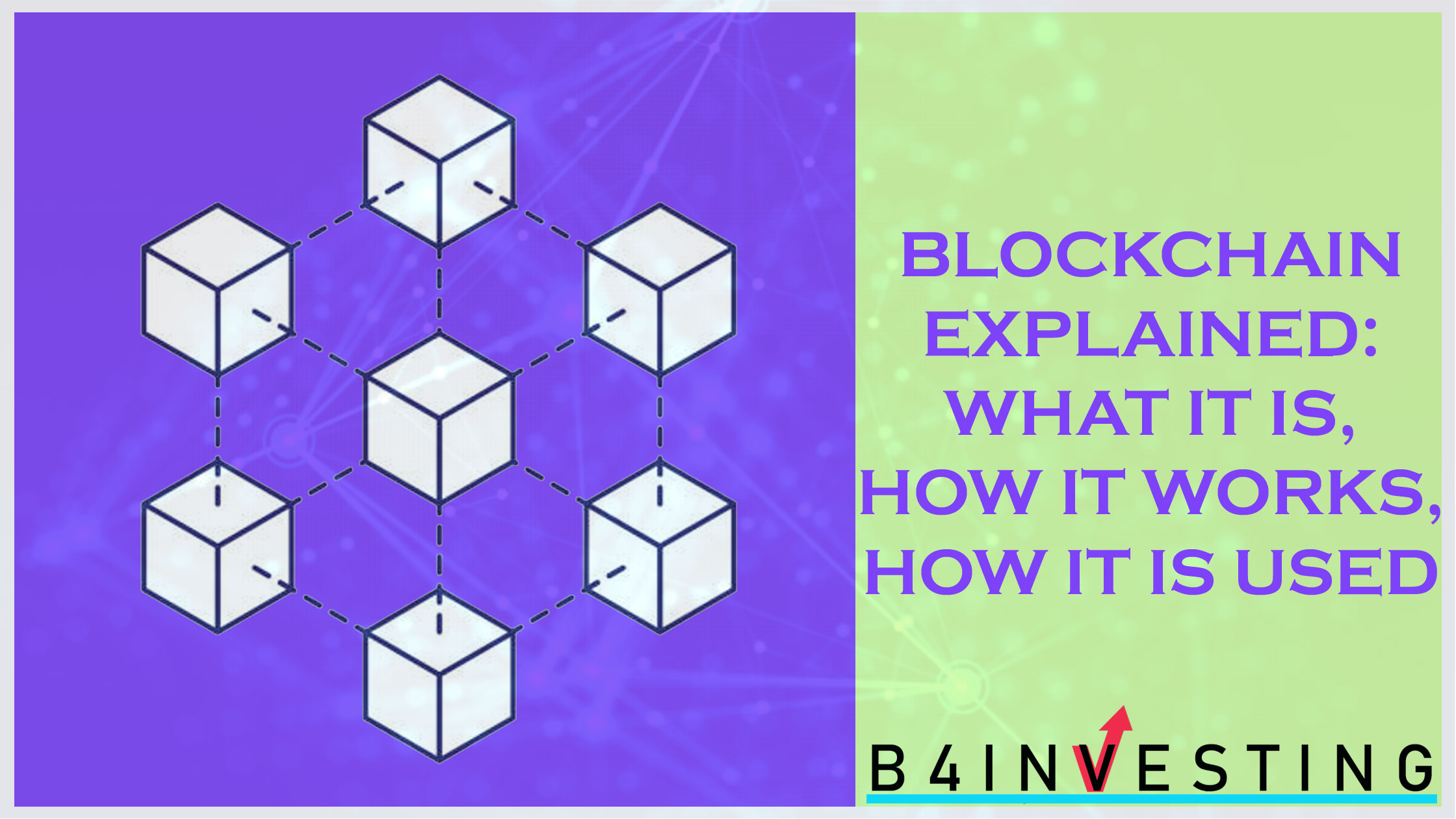 Blockchain explained: What it is, how it is used, where it works, difference between Blockchain and Bitcoin

Blockchains are popular for their important role in cryptocurrency systems, like Bitcoin. A blockchain is a distributed database or digital ledger that is shared among the network of computer system. Like database stores information, a blockchain stores information electronically in digital format. Blockchain maintains a secure and decentralized record of transactions.

How does blockchain work?

A blockchain collects information in block; a group. Block has certain storage capacity so when it is filled, it is closed and linked to the previously filled block. This forms a chain of data known as the blockchain.

Each block in the chain contains a number of transactions. When a new transaction occurs on the blockchain, a record of that transaction is added to every participant’s ledger. The decentralised database managed by network of multiple participants is known as Distributed Ledger Technology (DLT). Blockchain is a type of DLT in which transactions are recorded with an unique identifier called a hash. So, each block contains a hash, batches of recent transactions and hash of the previous block. The hash of previous block links the blocks together and it prevents any block from being altered or a block can not be inserted between two existing blocks.

The goal behind blockchain is to allow digital information to be recorded and distributed but it can not be edited. Blockchain presents records of transactions that cannot be altered, deleted, or destroyed.

Blockchain works on 3 important concepts; block, nodes and miners. Lets read about each in detail.

Decentralisation: What are nodes?

Blockchain shares data among several network nodes at various locations. This is known as decentralisation. Decentralisation is one of the important feature of blockchain. If somebody tries to alter a record at one node of the blockchain, the other nodes would not be altered. If one user tampers with Bitcoin’s record of transactions, all other nodes would cross-reference each other and easily find out the node with the unmatched information.

This system helps to establish an exact and transparent order of events. No single node within the network can alter information held within it. The majority of the decentralized network’s computing nodes would need to agree to validate new entries or records to a block.

As blockchain is decentralised in nature, all transactions can be seen by having personal node or blockchain explorer. Each node has its own copy of chain and it gets updated immediately as soon as new block is added. So, user can track bitcoin where it goes from its blockchain. If a hacker steals bitcoins by any mean, bitcoins are traceable. Whenever hacker uses to sell it or to purchase goods, it will be visible on blockchain. Identity of owner of bitcoin is not visible.

What is a miner?

Miners create new blocks on the chain through a process called mining.

In a blockchain every block has its own unique nonce and hash and the hash of the previous block in the chain, so mining a block isn’t easy, especially on large chains.

Miners use special software to solve the incredibly complex math problem to find a nonce and then nonce generates an hash. Because the nonce is only 32 bits and the hash is 256, there are roughly four billion possible nonce-hash combinations that must be mined before the right one is found. When that happens miners are said to have found the “golden nonce” and their block is added to the chain.

As we discussed above, new block is added to the end of the blockchain and each block contains its own hash along with hash of previous block. So, it is difficult to go back and alter the block. If hacker wants to alter any block, he will need to alter all blocks as they are interlinked. The hash is generated by complex mathematical operations and blockchain is shared on various computer nodes, it is very difficult to alter any block. If hacker tries to alter block on one node, the copy of blockchain present on his node would not match with copy of blockchains on other nodes so this single different copy would stand out.

Blockchain is famously used in cryptocurrencies. Cryptocurrency is a type of digital currency that can be used as a means of payment to purchase goods and services. ocurrency is a kind of money that exists in the virtual or digital world which uses encryption to enable the security of transactions. In other words, it is type or digital money that serves the purpose of ordinary money like dollars, pounds, rupees, etc. but does not have a physical form like banknotes or coins. Cryptocurrency is a new form of digital money.

Bitcoin uses blockchain concept to record a ledger of payment but blockchain can be used anywhere to record any data. As blockchain is decentralised, secured and transparent in nature, it can be used in many industries like logistics, education, supply chain, healthcare. It can also be used in recording votes of people as once data is recorded, its very difficult to alter it.

We read what is blockchain, how it works and where it is used. We also explained difference between blockchain and bitcoin. Blockchain is a technology to store data in more secured form. Its a new form of database but it is more secured and its not dependent on any third party. Traditional database can be altered but it is very difficult to alter blockchain as its a chain of block which contains information along with has of its own and previous block. As nobody can alter the data, people are trying to use it more to store data for the purpose of security. Bitcoin any other cryptocurrencies also use blockchain to store transaction ledger.